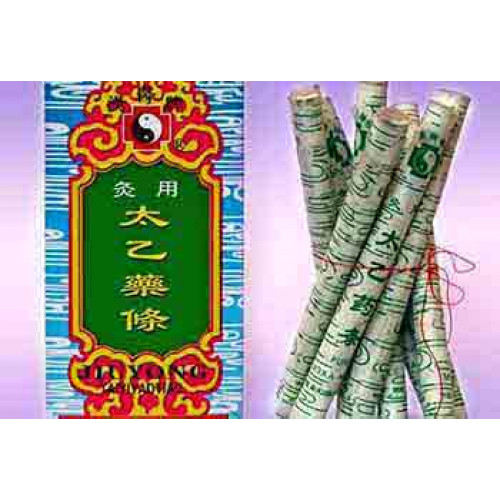 ﻿The picture may differ. Cigars are made from very high quality wormwood, there is mint in the composition, when the cigar smolders, it emits the aroma of medicinal herbs. It takes about 2 hours for moxa to burn completely. Cigars should not be raw, because. will not burn. 10 cigars are in a plastic bag and a cardboard box. The size of the cigar is 20 cm and the diameter is 1.8 cm.

Moxotherapy, the second name jiu-therapy refers to the method of reflex therapy, where a wormwood cigar, i.e. moxa cauterize or warm the skin in BAT. Western and Eastern medicine differ in that the first one treats a specific disease, while the Eastern one assumes a pre-morbid condition, and eliminates it already at this stage. For the manufacture of moxa, wormwood is more often used, which burns easily and, according to an old belief, drives away evil spirits. When wormwood smolders, it is an excellent antioxidant for the whole body. After warming up, blood circulation in the body improves, metabolic processes are activated, energy blocks and spasms are eliminated, internal forces are stimulated, immunity increases, nerves calm down, which leads to rejuvenation and slowing down aging. Smoke has a healing effect on the respiratory system and skin.